Celebrating its 25th year of business in 2022, Accudyn is proud to be a family-owned and woman co-founded manufacturer. All of that makes us wonder: what are some of the lessons to be learned from Accudyn’s success and the unique perspectives of its owners? In honor of Women’s History Month, we asked Accudyn co-founder, Peg Bly, not only how she got here, but what she believes Accudyn and women in manufacturing have to look forward to in the coming years? 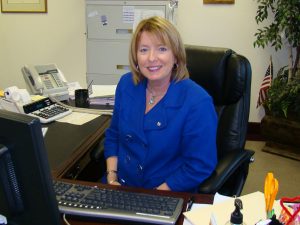 What can you tell us about your education and the beginning of your career? If it wasn’t in manufacturing, did you envision yourself getting into this field or even staying in it long term?
I was initially a psychology major. After graduating with my psych degree, I worked for several years and finally, deciding that social work wasn’t to be my career,  I took a job as a secretary in the tool shop at Johnson Controls. I found I had an interest in accounting and went back to college to pursue that as my major. I moved into the JCI accounting department and worked in both their cost and general accounting departments, finally ending up as their accounting manager. Tom and I met at Johnson Controls and worked there for years. I left Johnson Controls to stay home with our children. 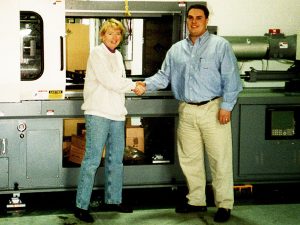 1997: Peg posing with salesman John Kowalkowski after the purchase of one of Accudyn’s first presses.

Did you envision yourself as a business owner before co-founding Accudyn with your husband, Tom?
Tom had talked about wanting to go into business for ourselves for years. My father started a machining business and I grew up working there in various ways. Having come from a family-owned business, I knew how difficult it was and wasn’t sure I wanted any part of that! After many years of talking about it, at age 45 we decided that if we were going to do it, now was the time! All the kids were in school and I was ready to go back to work. Tom could handle the operational end and I could handle the financial/business end. 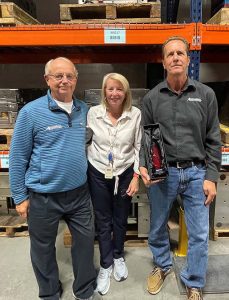 2021: Tom and Peg with Director of Purchasing, Steve Michael, after an Accudyn years of service award ceremony.

What is it like running a business with your spouse and family?
Tom and I are very fortunate. Not many people can work alongside their spouse all day and still say they enjoy it, but we have! From the beginning we had clear roles for each other. The only conflicts we ever had were if we ventured into the other’s area. Husbands and wives are always making compromises. In addition, we had worked together for years at Johnson Controls. It will probably be harder for our children. Sibling relationships aren’t usually as complimentary as those of couples are. But you know, we wouldn’t all be together in Erie if it weren’t for the business! So, we work hard at making it all work, not only for our family but for all our employees, many of whom are like family.

What were/are some specific challenges you’ve faced as a female business owner and having a family-owned and operated business? How did/do you overcome those?
On the family side, you feel like you are unable to give 100% to anything, so you have to be really focused. When you’re at work, you try to give 100% to work. As a woman, sometimes you feel you have to work harder than the others, especially if you are in a male dominated field. When you’re at home the family has to come first. This is harder when you own a business because we lived and breathed it. Sometimes this was really fun, because we enjoyed talking about work, but it could definitely also consume you, so finding a balance could be difficult.

I would sometimes joke with the guys in a meeting that I felt like “cellophane man”—talked right over or through — but quite frankly, I don’t think I’ve ever felt disrespected. I’ve also been in many groups where I’m the only woman participant. These can be a little intimidating, at first, but I’ve learned so much about how differently men and women approach and look at problems. I think the men I’ve worked with over the years have learned as much from me as I have from them. 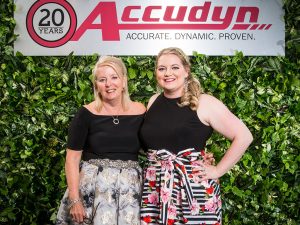 What were/are some unexpected rewards of becoming a business owner and/or an owner in manufacturing?
For me personally, having our own business gave me a real sense of accomplishment and I hope I was/am a good role model, particularly for my daughter, regarding how you can have a career and still attend to family. [Our daughter] Danielle juggles all this daily and I give her so much credit!

For the family, it was just such a blessing to have Tom home instead of traveling all week when the children were young. The kids could work side by side with their dad, and they’ve been working in and around the business since they were very young — cleaning floors, cutting grass, packing parts— a bit of everything! 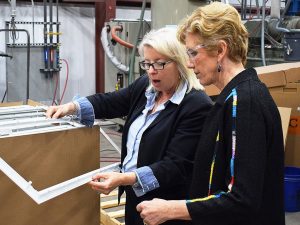 2017: Peg Bly with then Erie County Executive, Kathy Dahlkemper during the politician’s initiative to visit 50 local businesses within 50 weeks.

Can you reflect upon changes you’ve seen in the Erie area, for instance, in injection molding and women in leadership/ownership roles in manufacturing?
Because Erie has always been so big in the tool and die arena, it was natural that injection molding would be big in our area. Many of the old plastic shops are gone but quite a few have survived. I recently spoke with an academic who told me that more than half the college admissions are now women. This speaks well for the future of women leaders in our business. Women ownership roles will follow. One of the most exciting things for me in the past decade has been the acceptance by women of each other’s choices. Being a stay-at-home mother is often more challenging than going out to work where you receive a paycheck and accolades for a job well done. Both roles, stay at home mom and working mom, I think are now available to women and supported by them without judgement. 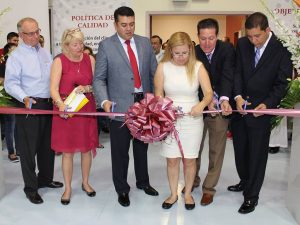 c. 2017 Tom and Peg at a ribbon cutting ceremony with the co-owners of Accudyn de Mexico.

Accudyn is celebrating its 25th anniversary this year! Where do you hope the company goes in the next 25 years?
I see so much opportunity available to our customers with the addition of AME (Accudyn Mold & Engineering). Tom and I were actually a bit uncertain about taking this leap with expanding our facilities and our capabilities, but the younger generation (Ted, Jon, and Danielle), were very optimistic and saw this as a natural progression for the company that would also alleviate very relevant customer concerns, like reshoring. Their vision for Accudyn’s future won us over and we are all excited with the energy that they and the rest of the Accudyn team have brought to this new endeavor. We all think it will add another whole dimension to our capabilities!

Any advice you would have, particularly for women in manufacturing who are in leadership roles?
I think we need to continue to do what we can to help generate interest in getting women into manufacturing roles, and we also need to just get women and men together in the same room to provide their different perspectives. I truly believe that having a more balanced team really enhances the dynamic of a company. I think the leadership area is still in need of the biggest strides, but women will catch up. Pay equity between women and men is often discussed as well, and I hope women will catch up there too, and that’s awesome.

Additional thoughts?
I’m always amazed by our Accudyn women who juggle family and careers, who juggle work and their passions, and who juggle illness and work. All of them are such an inspiration to me.

What is a little-known fact about you?
My mother was an amazingly strong woman! She told me once if I wasn’t sure to how to act that I should “bluff” my way through and soon I would feel more confident. I did that a lot at the beginning especially when I had to speak in front of a group. It would petrify me!

Peg, you initially mentioned that you were a psychology major. Although not much else was specifically said about that, it seems that your background in this subject really helped to put a lens on success within relationships in the workplace, at home, and in the various roles that women, including you, often take on throughout their lives! Here’s to finding your niche, your balance, a whole lot of confidence, and to women catching up (no more “cellophane men”)! Thanks, Peg!